With spare time becoming somewhat of a luxury these days, I’ve found myself opting for titles with a slightly shorter playtime, but obviously little/no reduction in emotional impact or intrigue. My recent review of Stories Untold is a pretty good example of this. In a similar vein, I believe I’ve found another unique title with an interesting premise and a creative storytelling method; here’s Her Story.

Developed and self-published by solo developer Sam Barlow, Her Story is probably best described as a ‘computer simulator’ style of game with a unique premise. Wanting to learn more about the case details of a murder that took place in the 90’s, our protagonist (whom we know nothing about, not even what they look like) has been given access to an old computer archive gathering dust in the basement of a police precinct. On this computer are the miscellaneous and unordered snippets of footage chronicling seven separate police interviews of a single woman at the heart of the investigation. As time goes on cracks and inconsistencies begin to occur in the woman’s story. Your job is to piece together the truth of what happened all those years ago, armed only with archived footage and antiquated software. 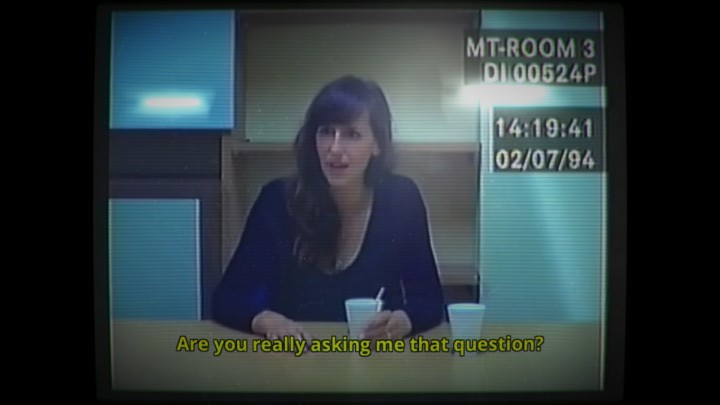 Dropping right into the gameplay with no introduction, I’m greeted with an exclusive view of the old CRT monitor, with no provision to look around at my surroundings. On the desktop is a simple WordPad doc entitled ‘ReadMe.txt’. I oblige. It’s some simple instructions to get us started, and how to use the software. There are three main elements to the mechanic of searching for videos: 1) The videos only contain the woman’s answers, and omit the detectives’ questions. When you enter a keyword, the software returns videos in which the woman uses that word in her answers, which you can then watch. But: 2) The software will only return the first five videos (from a chronological standpoint) in which the interviewee uses the keyword. Previously unseen videos will have an icon in the corner of the video thumbnail. And 3) The goal is to simply unlock and view as many videos as possible in order to determine the identity of the killer, as well as means and motive.

Straight away I’m hooked by this simple yet effective gameplay mechanic. Searching for videos and finding seemingly random footage, unorganised and without context, gives me a weird impression of an interactive version of Pulp Fiction. I start trying to put dates on each interview to give myself more of an idea regarding time-frame, this way when I see two similar but slightly different answers I can see which came first. It’s an absolutely fascinating mechanic. What makes things even more immersive is that the interview videos are shot in FMV, and the performance of British actress Viva Seifert is both nuanced and powerful. Every line is carefully laced with a subtle emotion, and body language also plays a major factor.

At first, it definitely feels a little overwhelming. There’s a progress meter of sorts: a grid of grey pixels that turn green whenever a new video is watched. It’s also hard to think of keywords to search for straight away, but when you’re stuck for a little while and you turn up a new lead that produces new unseen videos, it’s a pretty sweet feeling. Anyway, from the progress grid it’s easy to work out that there are around 270 possible videos to watch. Best crack on. 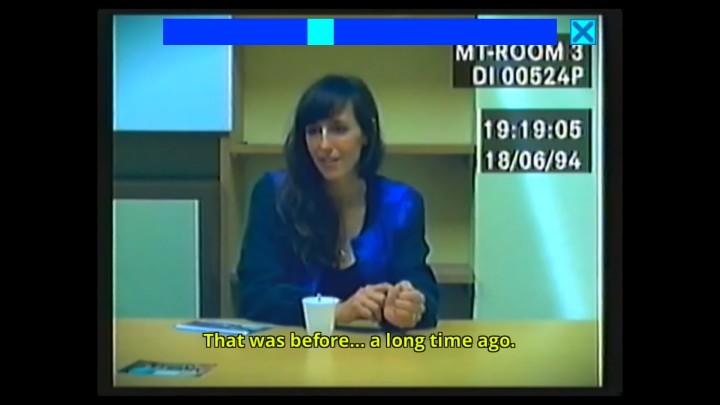 The more videos I watch, the more the dissociated threads of narrative begin to weave together to form an intricately knitted story. Without revealing much, I can say that there are certain videos that drastically advance the plot, whilst the vast majority seem relatively unimportant. Even though these videos don’t seem to contain much in the way of content, it’s crucial to remember that you’re not only looking for clues to solve the case, you’re also looking for inconsistencies in the interviewee’s behaviour and general demeanor. It’s fascinating to see how she can seem so placid and calm in one interview, and then tense and defensive in the next.

Like tumblers in a lock, everything begins to fall into place. The realization of what has occurred is a less of a sudden flash and more of a slow burn. Once you have a pretty good idea of what’s going on, you inevitably find the key video that confirms everything, as well as the identity of our silent character shortly after. It’s a powerful moment, and I can’t help but be moved by the strength and eloquence of Seifert’s delivery. For the game to be able to tell a story without any control of pacing or structure due to it being solely driven by the player’s searches, yet still be able to impart a firm and hard-hitting storyline, is a testament to the unique nature of the game and the creativity of the developer.

A couple of slight notes, however. For at least the first hour I spent playing, I was convinced that I needed to sort the videos into chronological order. You can save videos to your ‘user session’ which means you can view them without having to search them. As you can order them however you wish, I thought the idea was to put them in order from start to finish, due to the goal not being entirely clear. For crying out loud, don’t do this if you intend on playing. You know, unless you want to. Secondly, and I realize that this is trivial: the glare off the monitor. Every time you come across a video that provides a whopping great clue, the fluorescent lighting above you flickers on for a brief moment. The first time this happened, the effect was horrifying: a huge disembodied face glares out from the screen, completely unexpectedly. The shock affected me like a jump-scare, and it was only when it happened two more times that realized it was just my character’s reflection off of the monitor. Could have been a bit more subtle!

I rather got the impression that Her Story was a bit of a thought experiment; an idea to see how far one can push the boundaries of storytelling and create something one-of-a-kind. It succeeds spectacularly in my estimation. I can’t think of any game currently out there that can tell a story without looking like it’s trying to tell a story, which is essentially what Her Story does. After playing the game I did some research, and found out that in order to replicate the 90’s style video quality, the developer actually recorded the FMV footage onto two VHS recorders prior to its implementation into the game. Talk about going the extra mile. Viva Seifert’s performance also deserves massive recognition; her range and breadth of emotion really makes the game what it is. Her Story is currently ensconced on Steam for £4.99, with an average playtime of around 3-4 hours. Not an absolute bargain for the playtime, but doesn’t take the Michael either. If you can get past the clunky UI and remember not to freak out during the glare/refelction moments, it’s truly a refreshing new take on novel storytelling methods. Highly recommended.

Thanks for reading! As always, feel free to check out my twitter to be kept abreast of new review alerts, and let me know your thoughts if you’ve played/plan to play this title. Until next time,

7 thoughts on “Zerathulu’s View – Her Story”