Our journey begins! Just picking up The Shamutanti Hills again makes me feel like a giddy schoolboy. Let’s set the scene and get this show on the road.

(FYI – I’m condensing the introductory text a little, as I don’t want to outright plagiarize.)

Many years ago in the Dark Ages, the world was filled with dangerous, ruinous lands. One such land was Kakhabad, which had become overrun with all manner of evil creatures. There was no law, there was no ruler. Only chaos.

That was, until the Crown of Kings was discovered by Chalanna of Femfrey. With the Crown’s ability to bestow great magical powers of leadership and justice on its owner, Chalanna became Emperor and turned Femfrey into a prosperous nation. Chalanna’s goal was to create alliances between peaceful nation-states, and so in his wisdom he passed the Crown to all the neighbouring kingdoms, which in turn also became peaceful and prosperous, eliminating war and strife.

And so it became that each ruler would possess the Crown for a four-year period, to establish order and set their lands on the right path. The King of Analand, with much fanfare, duly received the magical relic, and Analand’s development was ensured. Or was, until two years later on the night of the Black Moon, when the Crown was carried off secretly by birdmen of Xamen, rumoured to be in the service of the dark Archmage of Mampang. Holed up in his Fortress, the Archmage’s desire was to make the whole of Kakhabad his kingdom. With the Crown of Kings, he would be able to take control of the lawless hordes of Kakhabad and command a ruthless army, capable of becoming a dangerous threat to the Femfrey Alliance.

Without the Crown, the previous benefits bestowed upon Analand began to crumble. Law and order deteriorated, the King lost the confidence of his subjects, and neighbouring territories watched their borders furtively. Rumours of the possibility of invasion were rampant. The only hope Analand had was for someone to travel to Mampang Fortress and reclaim the Crown of Kings, for only on its safe return would the curse be lifted from the land. YOU have volunteered yourself for this quest. Your mission: to cross the land of Kakhabad to Mampang Fortress and return the Crown of Kings!

Man, I got shivers. It feels so good to be back in the swing of this again. Let’s go over the rules and sort out the stats.

(Apologies in advance if I’m teaching any grandmothers to suck eggs, this is just for the benefit of those not familiar with FF.)

This is a SORCERY! Adventure Sheet. Much like a D&D character sheet, except there’s no provision for levelling up, and you record monster encounters on it too. There are boxes to record the standard adventure stuff: Gold Pieces, Equipment, Notes etc. Then on the top left, we have our three key attributes: Skill, Stamina and Luck, which I’ll explain in a little more detail.

Skill is the measure of combat prowess; the better your fighting ability the higher your Skill. Your Initial Skill value will not usually fluctuate very much, though sometimes there can be modifiers applied during monster encounters (fighting whilst under the influence of a Sleeping Draught may decrease your Skill temporarily by two points etc).

Your overall health, which will fluctuate wildly over the course of the campaign. The higher your Stamina the longer you will be able to survive. Starvation and sustaining injury will decrease your Stamina, whilst eating, resting and medicine will restore it. If you play as a wizard, casting spells will also incur a Stamina cost. Dropping to zero Stamina points ends your adventure in hot, fiery death.

Pretty much what it says on the tin. How naturally lucky you are as a person. At various points in the adventure you may opt (or be required) to Test Your Luck. Roll two dice. If the result is equal to or less than your current Luck score, you pass, and get a much more favourable outcome. Afterwards (regardless of passing/failing) your Luck is reduced by one point. In this way Luck is considered a resource like any other, and sooner or later it may run out…

Unless explicitly stated, an adventurer’s Skill, Stamina and Luck points can never exceed their Initial values.

Some other important bits to go over before we get onto stats:

When you encounter a monster you first make a note of its Skill and Stamina in the Monster Encounters section of the Adventure Sheet. Roll two dice for the monster, and add the result to the monster’s Skill to create the monster’s Attack Score. Do the same for yourself to create your Attack Score. If your score is higher, you have wounded the monster. If the monster’s is higher, the monster wounds you. For each wound you subtract two Stamina points, and combat continues until either you or the monster is reduced to zero Stamina. Whilst assessing damage you can also Test Your Luck. If you have taken damage, a successful Luck roll will reduce the damage you sustain to one Stamina point instead of the normal two. If you have dealt damage, a successful Luck roll will increase the damage you inflict up to three Stamina points instead of the normal two.

You have the choice of playing as either a warrior or wizard (i.e. simple or advanced playthrough). Playing as a wizard, you get to utilize any and all spells in the Spell Book, located at the back of each book. Each spell has a Stamina requirement, and a three-letter abbreviation, (i.e. for a barrier spell it could be WAL etc) which you need to memorize in order to use. Now this is the cool part: you can study the Spell Book as much as you like before starting the journey, but once you’ve started, you CANNOT refer to it again. Nor can you make notes on your Adventure Sheet about which spells you want to remember. It’s no good taking on a band of orcs only to suddenly realize you need to look up on how to conjure a fireball, is it?

When the opportunity to use a spell arises, you are given a choice of five three-letter abbs, each one with a reference you turn to if you want to use that spell. But you need to be careful; some spells only work with the help of an additional item. And some of the abbreviations don’t correspond to real spells at all!

Once per book you are able to call upon your benevolent Goddess, Libra. But once called upon, she cannot help you again until you reach the next book. Libra can provide divine assistance in one of three ways:

Revitalization. Once per book, Libra can restore all three attributes: Skill, Stamina and Luck, back to their Initial values (all three simultaneously). It’s not given as an option in the text; you can do it wherever you like, even in combat.

Removing Diseases/Curses. Once per book, Libra can remove any and all ailments you have picked up during the course of your adventure, including diseases and curses. Again, this is not given as an option in the text, you can do it wherever you like.

Escape. During your journey you may find yourself in a sticky situation. You may be given an option in the text to call upon Libra, if you have not done so already. If you do, she will assist you and an opportunity to escape the situation will present itself.

So, let’s roll for stats! First: Skill, normally determined by rolling one die and adding six to it, but as I’m playing as a wizard I can only add four to the die roll. I’ll be weaker than a warrior, but the ability to use spells more than outweighs the difference. The die feels good in my hand, I’m expecting big things: 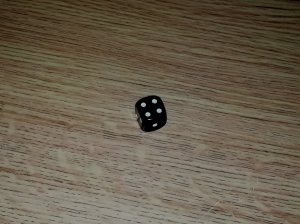 Not bad, not bad. This gives me an Initial Skill of eight. My swordsmanship will be pretty lame but I’ll mostly be relying on my knowledge of the Spell Book. Next up: Stamina, determined by rolling two dice and adding twelve to the result. He winds up to roll: 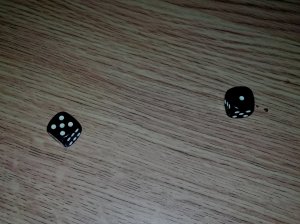 A six gives me an Initial Stamina of eighteen. Hmmm. Pretty average, could be worse. I’ll have to keep a good supply of Provisions to keep my Stamina replenished. Lastly: Luck, determined by rolling one die and adding six. I really want a high value here, it can just take one poor Luck roll to end an adventure prematurely. Trust me, I know. Do the Gods smile on me…. 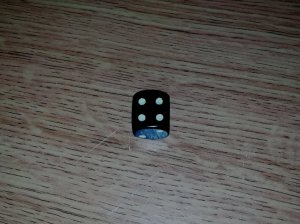 Well, a half-smile I guess.

So my initial attributes are:

And in addition, my starting equipment:

I think that’s everything I need to get underway! Stay tuned for Chapter One, and the first steps on the path to adventure!