This week’s review concerns a game that stayed in my Steam library, unplayed, for quite some time. I bought it mainly because of the name; it intrigued me. And I couldn’t put my finger on what type of game it was; which also intrigued me. But I must have had a bit of a gaming backlog at the time, which meant it gathered some e-dust before I brushed it away a few months ago and embarked on a playthrough. Here’s Gods Will Be Watching. 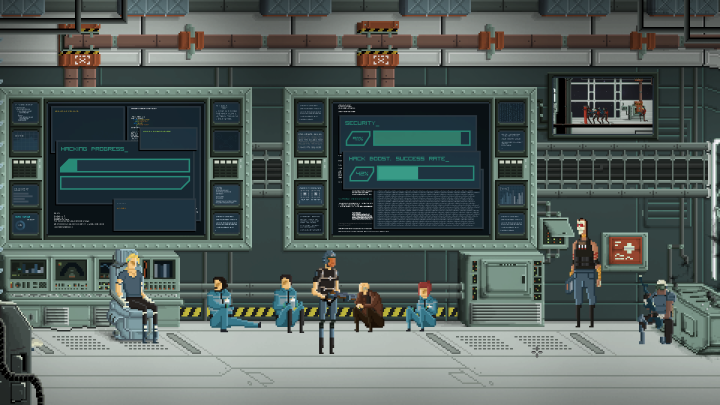 The product of Spanish studio Deconstructeam and publishing behemoth Devolver Digital, GWBW is a point-and-click adventure with a little tweak. All titles that fall under this vast genre umbrella will invariably have an element of puzzle solving within the gameplay. It’s part and parcel of the experience. Where GWBW appears to differ is that it doesn’t rely at all on the ‘hidden object’ mechanic. Instead, it has opted for a more cerebral ‘keep all the plates spinning’ approach.

The story centres on Sgt. Burden, a highly trained space soldier mixed up in some heavy stuff. The game chronicles his exploits and missions in his attempt to bring peace to a galactic sector rife with fighting, terrorism and slavery. Try as he might, he soon learns that there are hard choices to be made in life. There are no black and white areas, it’s all the same sepia-tone grey. There are no right or wrong choices, that’s for the gods to decide.

And they are watching. 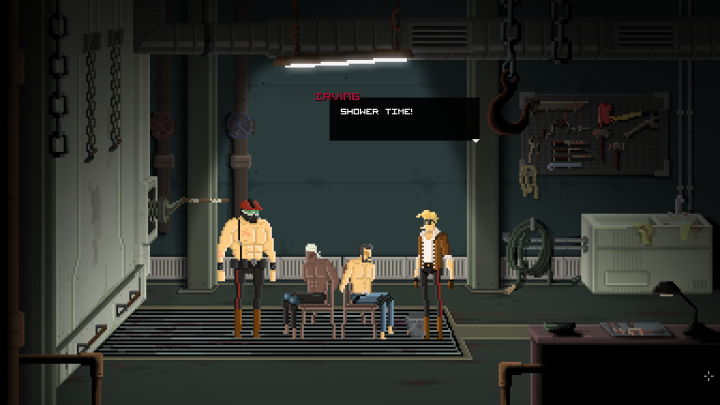 As the game opens, the opening frame consists of the initial scene with a menu overlay. The scene before us is dark and bleak. Figures cling to the warmth of a campfire in the pitch black of an alien world. I smile when I see the big pixel art-style, immediately it tells me that the developers had confidence enough in their puzzles and plot to not feel the need for a refined look. Always a good sign. The crackling fire sound effect is on point; great use of sound never fails to draw me into a game. Using the menu overlay I hit ‘New Game’, then choose my difficulty. Get this: the default setting, ‘Original’, is the hardest version! The next setting down is ‘Original Light’ (easy), then two puzzle modes which remove the element of chance and luck, and a finally a narrative mode, the equivalent of DOOM‘s ‘I’m too young to die’ difficulty setting. I’m in a bit of a quandary, I tend to suck at hard modes. But the description that comes with ‘Original’ says that it’s the truest to the spirit in which the developers intended the game to be played. Under my breath I mutter a slight variation of the words ‘screw it’, and hit Original.

The overlay disappears, and the scene transitions seamlessly into dialogue. Pay attention, the backstory comes thick and fast. These guys have been marooned by a group calling themselves Xenolifer, a small force of activists dedicated to eradicating slavery, albeit via highly immoral and twisted methods. Xenolifer are being hunted by the Constellar Federation, the big evil bad guys who conquer and enslave alien life. Then enter the group to which these poor marooned souls belong: the Everdusk Company for Universe Knowledge, mercifully shortened to just ‘Everdusk’ (or E.C.U.K), who serve only balance, peace, and common sense. Kinda like Jedi. Extending this analogy a bit further, the Constellar Federation would be the Empire, and Xenolifer would be a much darker version of the Rebellion that has a noble cause, but commits atrocities in the process. This Everdusk squad’s leader appears to be one Sgt. Burden, who controls the bulk of the conversation. 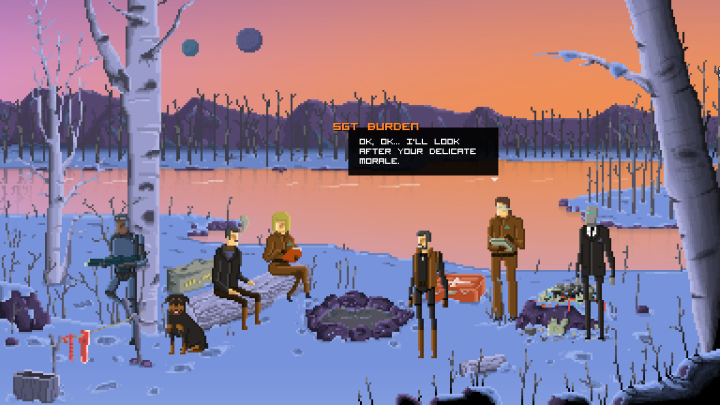 I have a slight gripe in that there’s a lot of information to absorb within the first two minutes. It’s pretty much the entire backdrop to the game in the opening scene. I would’ve liked to have seen the introduction to the galaxy’s political situation develop a little more organically over a slightly longer period, but as the game is quite short, I can see why the developers chose to address it quickly. Still, introduction over, I look forward to getting my teeth into the first puzzle.

[WARNING: Mild spoilers ahead (Chapter 1 of 7 only) – Skip to Final Thoughts to avoid]

Chapter One takes place a year before this quaint little campfire, onboard a research vessel hijacked by Xenolifer, but what’s interesting is that Burden is now part of this Xenolifer team. The plot thickens. They’re trying to steal some apparently very important data, whilst using four hostages to prevent Federation soldiers from storming the barrier that divides them from the hostage crisis. Here comes the puzzle. The hacking progress has to reach 100% to complete the level. You play the game via Burden issuing orders to his team members. Burden can order the hacker to prime the ‘hack jump’, which adds to the percentage chance of pulling off the jump. If, on execution the jump is successful, the hacking progress increases dramatically. But it can fail if the network security is low, so Burden has to periodically order the hacker to boost security. The hostages need to be managed; let them get too relaxed and they’ll attack you (getting shot and killed in the process). But if they get too stressed they’ll do a runner. On top of all this, the soldiers are chomping at the bit to storm the room. With every action you take, the soldiers inch closer to the barrier. The less hostages you have remaining, the more aggressively the soldiers approach. If they get too close, game over. But you can order your sentry/best friend, Jack, to provide covering fire, moving the soldiers back a few steps, as well as negotiate, forcing them to remain still for a few actions. The downside is this affects the mood of the hostages. See what I meant by ‘keep all the plates spinning’?

I failed. Again and again. I tried keeping my hostages calm, and the soldiers breached. I tried keeping the soldiers at arm’s length, but all my hostages went nuts. It’s like playing several games of Jenga at once, but altering one tower changes the structures of the other towers in different ways. It’s insanely difficult. After my twelfth or thirteenth attempt (who’s counting) I finally managed to fill up the progress meter and complete the level, but two of my hostages died. At the end I got a concise summary of how I’d played compared to all other users. I gaped in awe at how badly I’d done in relation to everyone else, but at least I’d done it. I actually really enjoyed the puzzle; the delicate balance of competing probabilities is like walking a razor’s edge, you’d really have to be on top form to get through it and keep all four hostages. All subsequent chapters, seven in total, consist of similar balancing acts with small elements of luck strewn here and there, but each has its own distinct personality.

By the time the credits roll around, I think back on the journey me and Sgt. Burden took. It took a long damn time, and we went through some serious crap. “Bonds formed in the crucible of adversity are the toughest to break”, so they say. It’s hard not to feel some attachment after everything the game has put me through. So on the whole, I really enjoyed the game. Each chapter requires you to either play perfectly or choose some form of sacrifice. It’s not easy. Confession time: I lasted three chapters before I caved and had to change difficulty to ‘Original Light’. I know. I’m not proud of myself. But I still ended up dying over and over again. My only criticism is that the over-arching story never truly gripped me, owing to the attention-grabbing soul-crushing nature of each individual chapter. I felt that the developers really could have fleshed out the backstory more. The set-up was there from the opening scene, but ultimately it fell slightly flat. It’s a game you definitely play more for the one-of-a-kind puzzles than the plot. Having said that, Burden’s own backstory is far from dull as it is slowly revealed that something eerie and supernatural may be pulling the strings of his destiny. A destiny that continues to unfold even after the credit sequence finishes, and it transpires there’s a bonus chapter to explore. Do the answers one seeks lie within?

Gods Will Be Watching is a brutal cheese-grater of a game. Even on the Light setting you will fail. And fail. And die. And fail. To the point where you rue becoming an indie gamer entirely. But the puzzles are so beautifully designed and carefully tuned that it’s hard not to appreciate the graft the developers put in. I’d have liked a little more story-meat on the bones but that’s just the avid narrativore in me talking; you shouldn’t let that distract you from taking a bite out of this well-crafted morsel. It sits on Steam at £6.99, which is ridiculously low considering how long you can spend on it. I would gladly pay a little more for it. Now if only I could shake this unnerving sense of divine voyeurism that has settled over me….

Thanks for reading! As always, feel free to check out my twitter for new review alerts, and let me know in the comments your thoughts/experiences with this title. Until next time,

One thought on “Zerathulu’s View – Gods Will Be Watching”