Regular readers may have started to find a pattern in the types of game I tend to review; namely, titles that leave a lasting impression on the player. It tends to be that these games are the ones loaded with rich stories and powerful emotional content (see my first blog for explanation). But it’s not always the case. This week’s game is memorable for very different reasons. Not only does it boast a unique delivery method for the plot, but it raises questions and shines a spotlight on an increasingly insidious and hotly debated element of our everyday lives: our online privacy. This week’s game touches on this, and forces us to rethink the extent to which we voluntarily pump personal details onto the web. Here’s Orwell.

A product of German developer Osmotic Studios and Australian publishing house Surprise Attack, Orwell is perhaps best described as an ‘online simulator’. The name is of course a reference to George Orwell, author of 1984, which hopefully like me you were forced to read as a schoolkid (though for me, forced might be too strong a word). We know then, even before the most cursory research attempts, roughly what the game will entail. There will be privacy issues. There will be surveillance. There will be an oppressive government, bent on the slow erosion of freedom in the name of safety, and there will be issues about our data. The timing of this review is actually quite ironic: just two months ago from the time of writing we reeled in the wake of the Cambridge Analytica scandal. We recoiled in disgust at how platforms like Facebook can harvest data from its users so easily, then treat it with utter disdain. But this issue is much older than mere months, and every now and then we get served with necessary reminders of just how easy it is for others to access our information, amidst the backdrop of a seemingly inevitable march towards a so-called ‘surveillance state’. But enough of the heavy overtones of doom, this is a rich, juicy muffin of a game after all. Let’s go grab the butter from the fridge. 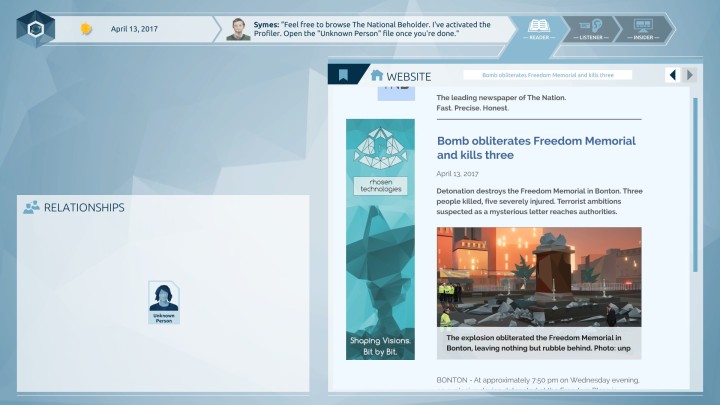 The game starts. A quasi-desktop screen loads. Straight away, I’m asked for *drum roll*…my email address. Hmm…you can imagine what I’m thinking. It’s optional, but if this is some kind of weird fourth-wall break I’d at least like to see how it plays. I input my actual email address.

A cutscene ensues. It’s a string of footage from multiple CCTV cameras at one location: Freedom Plaza. In terms of the art-style, the developer seems to have gone for a more minimalist, polygon approach when displaying faces and photos on-screen, giving it a distinct low-res feel. Perhaps there’s some sort of compression factor due to the fact I’m sitting at a computer controlling a character sitting at his computer? Well, maybe. It adds a certain something though. As I watch the footage, a bomb goes off in the middle of the plaza. Rubble rains down in huge, hailstone chunks, and people flee in fear. It’s a bit grim, but not all that graphic.

The feed ends abruptly, and I’m back on the desktop. A chat window opens up, and I’m introduced to my handler, ‘Symes’. It appears that from a sea of applicants, I have been selected to be a part of a secret, experimental intelligence-gathering government program codenamed ‘Orwell’. My first task: to trawl the web for clues as to who orchestrated the Freedom Plaza bombing.

The first few minutes are spent getting to grips with the software. There’s an internet browser, known as the ‘Reader’, which gives us access to certain web pages and articles. A little later, the nefarious ‘Listener’ is introduced, whereby we can read transcripts of phone calls, chat sessions, and emails. Little snippets of pertinent information (known as ‘datachunks’) are highlighted, and by clicking and dragging they’re uploaded to Orwell where they flesh out the profiles of target individuals. What’s interesting is that only I can see all this data; ‘Symes’ can only see what I’ve uploaded to Orwell. I have to decide what information to pass on to my superior. It’s more than a little creepy, but this gets amplified when introduced to the concept of conflicting datachunks. When datachunks are in conflict, i.e. when two or more chunks contradict each other, I can only choose one to upload to Orwell, so in a very real sense I now have the ability to shape the outcome of the investigation as I pick and choose what my superior sees.

This feels like a gross abuse of power. Here I am, some random internet user, with presumably no background in law enforcement or any relevant experience or qualifications, making decisions affecting the security of a nation. I found myself doubting whether such a reality would ever come to pass; unqualified informants scouring the internet, reporting our online lives to the authorities all in the name of national security. It’s preposterous….

[WARNING: Mild spoilers ahead (ending not revealed) – Skip to Final Thoughts to avoid] 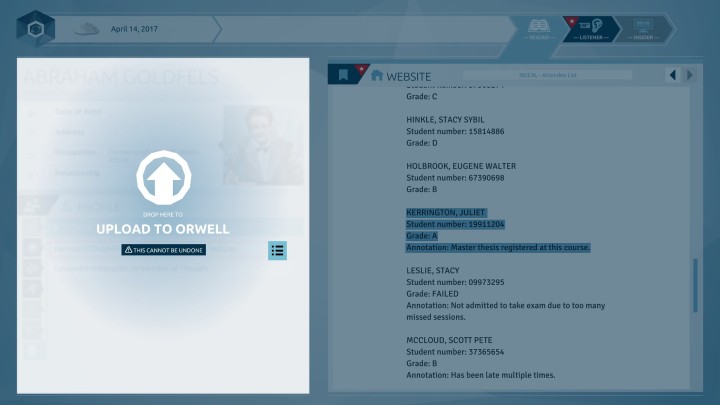 The objective is clear from the very outset of the game: find the person(s) responsible for the Freedom Plaza bombing. Our first lead is a young woman spotted in the plaza shortly before the explosion. Using facial recognition software the woman is identified as a Cassandra Watergate (really, developers? Watergate? Was Sketchy McDownWithTheGovernment taken?) and as she has a prior police record, Symes gives us a green light to make her a target of our investigation. Whilst stalking her online activities, a wholly unsettling experience, I begin to piece together a network of her associates. I learn what her previous misdemeanours were; she was arrested in connection with a protest that turned violent, staged at the same plaza, and organised by a little-known activist group known as ‘Thought’. Uncovering the origin of Thought and the identities of its members becomes a key area of scrutiny. After fleshing out a few personal profiles, another apparent bombing is reported in the news. Thought appears to be upping their game.

As the game progresses it becomes clear that there are many conflicting accounts of who is/isn’t a current member of Thought, whether or not they’re still active, and who was responsible for their various demonstrations. It falls upon me what to decide, and who’s accounts are the most trustworthy. I find myself agonising over every datachunk-conflict, trying to see all the angles. The sensation of unclean voyeurism never really dissipates, it sticks to me like a shirt on a hot day. The web of connections doesn’t seem to get clearer, it just seems to lead to more web. The second bombing took place at a university where the presumed founder of Thought works as a lecturer; he becomes another target. After uncovering new damning evidence implicating Cassandra, she’s taken into custody, where Symes questions her on the subject of a possible third bomb plot. Though she doesn’t know much, she names a shopping mall as a possible target. It’s called in, the bomb is found and defused safely.

From there on, everything begins to descend into a frenzy of lies, backstabbing, and surfacing secrets; there’s a little too much to detail in full. As the plot unfolds it becomes clear that my choice of which datachunks to upload is having a profound effect on the outcome of the investigation. I begin to get the sense that there may be more than one ending. The huge question is: why? If all I’m doing is acting on the online statements of target individuals, why is the truth starting to become more and more subjective? I think the message the game is trying to make is that single comments and statements, taken out of a broader context, can be construed in myriad ways to suit anyone’s needs. As the level of surveillance increases, its almost as if the value of each datachunk diminishes; imagine a video of a forest where the trees and leaves lose resolution as the camera pans out. When you can pick and choose your own evidence, and when it only has to be ‘suggestive’ rather than ‘conclusive’ to prosecute, everyone becomes guilty. The beauty of Orwell is the way in which it points out the ultimate fallacy of mass surveillance; that when you spy on everyone, everyone becomes the enemy. Look hard enough and you’ll find something to incriminate anyone of anything, regardless of culpability. It’s an important message, and one that requires serious thought before we, as a culture, blithely upload our innermost details online.

It would be very difficult to overstate the impact Orwell has had on me. A wonderfully thought-out game, with a niche storytelling method, and a powerful message to chew on. That’s pretty much my jam in a nutshell. At £7.19 on Steam it falls far short of even putting a dent in the bank, let alone breaking it. There is also some replayability if you wish find an alternate ending, however the downside is you’d have to start all over again, you can’t simply start from the climactic final chapter. But if that’s my only gripe with the game, that’s pretty darn good. A must for those who worry (or maybe more for those who don’t worry enough) about their online privacy, and a potent reminder to maybe temper the amount of data we upload to the web. You never know who’s on the other side of the screen, ‘keeping an eye on you’.