This week’s review is going to be slightly different. Recently I celebrated an integer number of years spent clinging to the outside surface of the sphere of rock and water we call the Earth. To commemorate the occasion, a good friend gifted me a new game to review. So here it is, completely new and freshly played: Last Day of June. 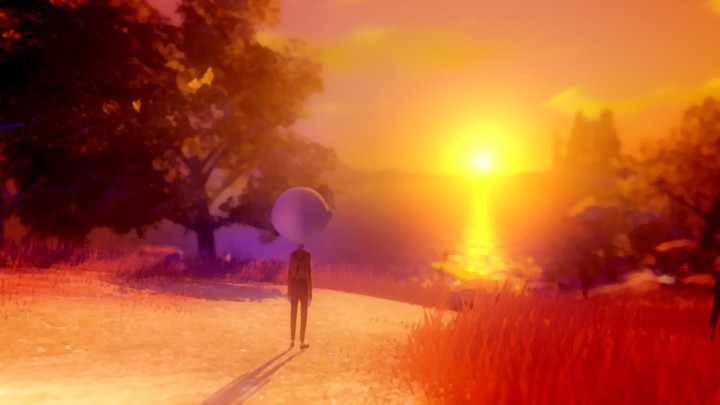 Published by 505 Games, Last Day of June is the debut title from Italian developer Ovosonico (other than a PS Vita exclusive release from 2014). I know very little about it going in, only that it’s going to be emotional, and that it deals with themes like loss and grief. Just as a precaution I raid my partner’s half of the bedroom for a box of Kleenex, and start up the game.

Sweet. Baby. James. As soon as the game loads up I feel like I’ve been sucked into a Monet oil painting. I seriously had no idea this degree of pure colour and vividity could be rendered digitally. To give you some context; I suffer from deuteranomalous vision (red-green colour deficiency to you and me), and yet it feels like I’m not missing out on anything. The beauty stems not from the level of resolution, but the sheer spectrum of colour, and the use of light. Everything, from flowers to grass, houses to rain, is of such vibrance and boldness that it makes you want to gape in unfiltered awe. If that weren’t enough, the focusing mechanism paints distant objects with broader, blurrier brush strokes which resolve and become clearer as they move into the foreground. It’s not even close: Last Day of June is the most visually beautiful game in my entire library. Hands down.

As if the rich visuals weren’t enough, we’re treated to a wondrous audio soundscape as well. A simple acoustic guitar, along with some superb strings and piano work, makes for the perfect glacier cherry topping on our cupcake of stunning graphics.

The game opens on a picture perfect scene of a couple at a lake. Straight from the outset, it’s easy to tell these two are madly in love with each other. Pushing back all negative or foreboding thoughts, I take control of the husband and get on with the first couple of tasks, bringing back a flower to the wife and fetching her coat from the car. It’s worth noting that there’s no real speech occurring; the characters are conversing in some form of garbled simlish. I find this a really nice touch, it forces the player to be more reliant on their imagination, and to interpret the conversation based on tone, cadence and body language. We learn that the wife may be an artist, she sketches her husband as a superhero. She whips out a beautifully wrapped gift but before I can open it, the game fades to white. 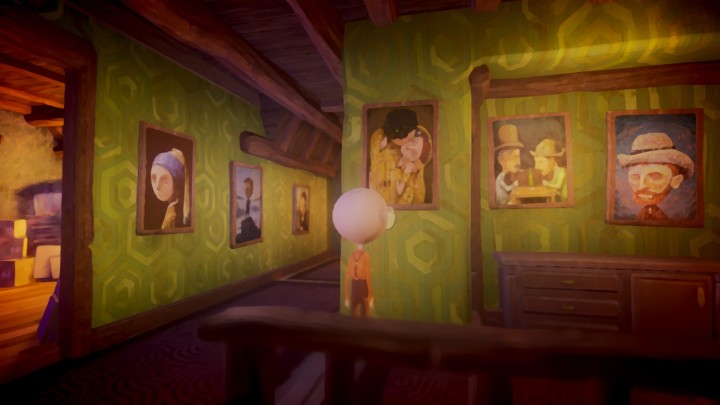 The game reconvenes at the couple’s painting adorned home (the trained eye will spot many real-life pieces, eg. Van Gogh’s self portrait and Klimt’s ‘The Kiss’). In the next five minutes or so, we get to meet the rest of the characters in this small-knit community through a series of interactions. We meet the old man, who originally gives the gift to the wife. A hunter-type, who’s gunshot startles the husband awake. A young boy, who wants only to play, and a friendly neighbour, who returns the can-opener she borrowed from the husband. It’s easy to sense that these are all going to become players in our unfolding drama.

[WARNING: Spoilers ahead – Skip to Final Thoughts to avoid]

Alas, the idyllic and picturesque dream-world was not to meant to be. After the title screen rolls up, the husband struggles with a nightmare. I hear a woman’s panicked cries and car tyres screeching. Waking up, the wife is not in her usual spot in her armchair, and the husband is wheelchair-bound. It’s pretty transparent what has happened. Grieving his wife, he forces himself to confront the art room in which she worked. Accidentally knocking off a dust-cover reveals a portrait of his departed wife.

Now is when the true magic of this game starts to become evident.

Touching the painting causes it to glow a shimmering gold; another touch and the husband has a visual flashback of the accident. The young boy, chasing his ball into the road, causes the car carrying the couple to swerve and crash, killing the wife and paralyzing the husband. Gasping and coming back to his surroundings, a surreal moment ensues: the other blank canvasses in the room begin to glow, and outside, portraits of the young boy, the old man, the hunter, and the friendly neighbour descend and hover all around the village, along with what look like holograms depicting chapters from the couple’s life. Gaining the freedom of movement once more, I can now explore these dioramic windows into the past. These two are so in love with each other it’s unreal, they’re truly kids at heart. Confronting the portrait of the young boy, I tentatively reach out a hand to touch it, only for it to disapparate into thin air and reappear back in the art room. I head back, mind full of questions and heart full of burning curiosity, to touch the painting of the young boy. I’m pulled inside… 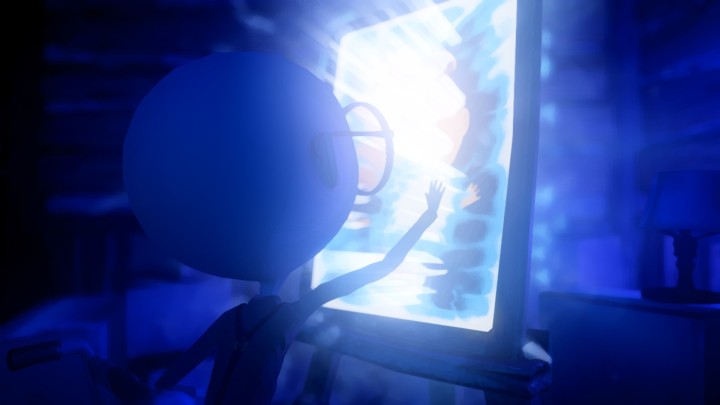 What follows next is straight out of a time-travel flick, but with a slight tweak. I can control each of the four characters, the boy, the neighbour, the hunter and the old man, from their ‘first positions’ at the beginning of the day. It’s a puzzle; the goal is to manipulate each character’s actions to ensure the car crash never happens, and the wife survives. But it’s not easy. A character may avert disaster by altering their role in the drama by use of a tool, or object. But the next character may require the same object, or is blocked by the actions of another. Its a delicate balance involving much delving into the shoes of previous characters, only to ultimately learn one daunting, cold, stomach-churning truth.

You could not have prevented this.

No matter how you try to second-guess yourself and think about what you could have done differently, it would’ve happened away. As this hits home I instinctively reach for the tissues. My hayfever seems to be acting up. During the final sequences, we hear a woman’s anguished cries as the world cracks and fractures around us. There’s a final scene where the couple, engulfed in heavenly whiteness, meet for what must be one last chance to say goodbye. The husband finally opens the gift. We don’t see what’s inside, but he starts to sob and they embrace. The camera fades back to the real world. The wife is crouching over a headstone with the husband’s glasses on top. The wave of realization hits like a tsunami.

This was never about the husband, it was all about the wife’s struggle to process the death of her partner. She tried fruitlessly to sketch and map the different decisions that led to each cause of death, becoming more and more frantic and anguished, until finally she accepts the inevitable. It transpires that she was pregnant during the accident. She realizes that the ones we love are never truly gone, their legacies live on in their actions and memories, and in this case, in the couple’s son. In the final post-credit sequence, the son, now around five or six years old, brings a flower to his mother who’s sitting at the couple’s favourite spot by the lake. The flower is the same colour as the one his father picked, so long ago. She pauses, then sweeps him up into a powerful hug. The game ends.

Damn this hayfever. I’m in pieces. The Kleenex box has halved in weight. This game is such a soul-cleansing experience, like a medicinal balm that needs to burn off the sloughed skin underneath before it can heal. It’s so…human. It teaches us that life and loss go hand-in-hand. In the wake of devastating loss, never try to think ‘what could I have done?’ or ‘what if x had happened?’ These questions never help, they only push one further down a dark path. To illustrate this, I believe the fracturing world is representative of the wife’s mental state, stricken by unimaginable grief and close to breaking point. The only way back to the right path is through acceptance.

It’s one thing to have a game packed with raw, heart-clenching emotion. It’s quite another to have said game accompanied by a powerful, unifying message of hope, acceptance, and the human ability to overcome.

I think of this game as a living entity, bestowed with a body and a heart. The body of the game is a wonder to behold: rich colours, idyllic scenery, and soul-calming serenity. Equally beautiful is its heart: the message it succeeds in telling, and the lessons we learn from playing it. At £14.99 on the Steam store, you can have an effective and constructive way to deal with times of stress, hardship, and despair, for the price of a new Blu-ray release (and at around four hours long, double the length). I can’t recommend this game enough, regardless of whether you have experienced tragedy first-hand. It’s those rarest of games that transcends gaming, and deserves a place in every gamer’s world.

Thanks for reading! As always, let me know your thoughts if you’ve played the game, or intend to play in the future. Until next time,